I’m continuing to get my oldest stuff out here first. I have this scorecard from August 16, 2002. The River Bandits beat the Silver Hawks 3-2. It was a fairly uneventful game but it did feature these five future MLB players:

Sadly, I can’t say I recall this game. It’s unfortunate, because all 5 of the future MLB players did well in this game.

The Silver Hawks scored a run the second inning. Dan Callahan and Jay Garthwaite both singled. Then with two outs Rick Haydel hit a double. Callahan scored but Garthwaite was thrown out at the plate on a relay from the left fielder to the third baseman to Mauer for the tag. The River Bandits tied it at 1 on a home run by Garrett Jones in the bottom of the third. The Silver Hawks took a 2-1 lead in the 5th inning when Jay Garhwaite doubled and then Dan Uggla tripled. The River Bandits would take a 3-2 lead in the 6th. Joe Mauer drew a walk, and then two batters later Jason Kubel hit a 2 run home run. Jesse Crain would close out the win for the Bandits, striking out the side in the 9th for the save, his first that season. 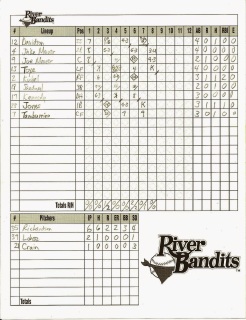 This was a very eventful game, as you can see by the scorecard (see pictures at bottom). The River Bandits‘ catcher was Joe Mauer, and his brother Jake Mauer played 2B. I think you probably know where Joe Mauer ended up, but his brother Jake is now the manager of the Cedar Rapids Kernels. Future MLB players Garrett Jones and Jason Kubel were in the lineup at 1B and RF, respecitvely. Jason Miller was the starting pitcher for the Bandits. He did make it to the big leagues, but only appeared in 4 games, throwing 4 innings. It didn’t go well. The only future MLB player for the Cougars was their starting pitcher, Dontrelle Willis. I have to say when I found this old scorecard it was pretty cool to see his name on there.

I can barely remember much from this game since it was so long ago now. I do remember Willis getting one strikeout (he had 5). But the main thing I remember from this game was the crazy rally the River Bandits had. Heading into the bottom of the 7th, they were down 6-3 after the Cougars hit two home runs in the top. The Bandits got the two runs back in the bottom of the 7th to make it 6-5. It stayed that way until the bottom of the 9th. Jake Mauer got a leadoff single. The next two batters struck out. Joe Mauer drew a walk and finally Michael Sandoval got a bloop single to tie it. I can’t say I remember all that, but I do recall the bloop single clearly. After a scoreless top of the 10th, In the bottom of the 10th, Matt Abram led off with a double. The next batter got on base on a fielder’s choice that failed to get Abram at third. An intentional walk loaded the bases before James Tomlin hit a game-winning single.

This was one of the first games I attended after moving back to the Quad Cities and it got me hooked. It was also my wife’s birthday, although at that time we were still almost 2 years from getting married. Being on a Monday there was not a lot to do, so we went to the game. I remember sitting on the benches in the old stadium on the third base side. It was not a big crowd but I had fun talking with some of the people near me as I kept score. I may have had a beer or two that night, even though it was a Monday. 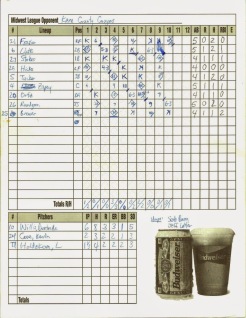 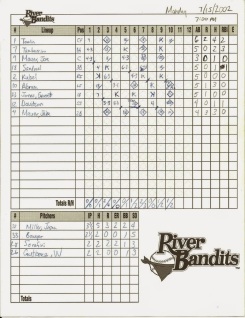